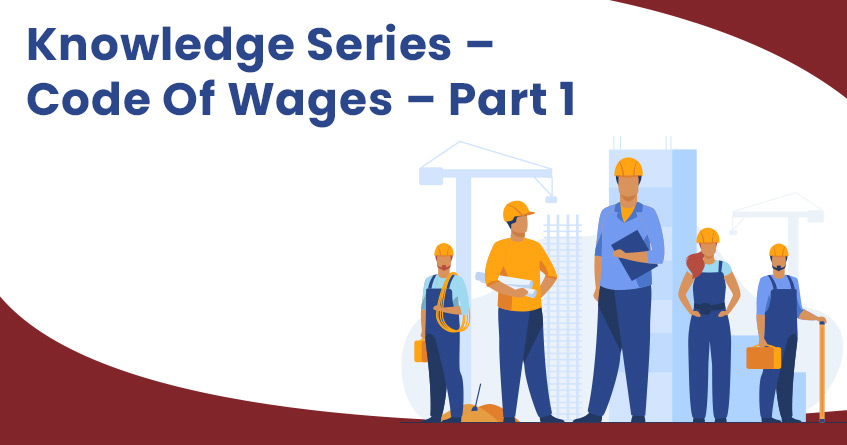 The government of India and various State Governments have been taking various measures to promote ease of doing business in India.  Proposed Labour Law Codes by Central Government, or labour reforms in India, if implemented in an appropriate manner can have a far-reaching impact towards reducing the compliance burden on corporates without comprising the welfare of the workforce.

The government of India has proposed to implement the following four Labour Codes on a Pan India basis to consolidate numerous Central and State Labour Law legislations:

With this note, LexComply.com wishes to initiate a Knowledge Series to share insight on the compliances under proposed Labour Law Codes. In this note, we will plan to give insight on the applicability of the Code of Wages and definitions thereunder.

The Code of Wages was passed in the year 2019. This Code has been enacted to regulate the terms of payment of wages to the employees. This Code consolidates the following Laws:

The Code of Wages will be extended to the Whole of India covering all types of workforce i.e. skilled, semi-skilled or unskilled, manual, operational, supervisory, managerial, administrative, technical or clerical work in a private sector or public sector or government employee, however, will not include the following:

Whereas in the case of Factories we need to consider the limits of employees provided under the definition of Factories as provided in section clause (m) of section 2 of the Factories Act, 1948 and rules made thereunder by State Governments.

As per Section 2(k) of The Code of Wages, an Employee means any person employed in an establishment for wages, for any type of work including skilled, semi-skilled or unskilled, manual, operational, supervisory, managerial, administrative, technical, or clerical work in a private sector or public sector or government employee however will not include the following:

Whereas currently as per the Payment of Bonus Act, 1965, there is an additional condition that the Salary of the Employee should not exceed Rs. 21,000 per month. This means that once The Code of Wages becomes effective the provisions pertaining to Bonus will be applicable to every employee irrespective of the salary/wages.

In the above-stated definition, the word “managing agent” as mentioned in the definition of Employer under The Payment of Bonus Rules, has been deleted, and instead word “Contractor” has been added. This will add to more accountability on Contractors in the case of Contract Labour.

As per Section 2 (z) worker” means any person employed in any industry to do any manual, unskilled, skilled, technical, operational, clerical or supervisory work for hire or reward, whether the terms of employment be express or implied, and includes—

But does not include any such person––

3. As per Section 2 (g) of The Code of Wages, “contract labor” means a worker who shall be deemed to be employed in or in connection with the work of an establishment when he is hired in or in connection with such work by or through a contractor, with or without the knowledge of the principal employer and includes inter-State migrant worker but does not include a worker (other than a part-time employee) who ––

In comparison with the meaning of Contract Labour in The Contract labor “(Regulation and Abolition) Act, 1970, the proposed definition provides for the exclusion of permanent/regular employees of contractor from the definition of  Contract Labour subject to certain conditions.

Key Variations Are as Under:

5. As per Section 2 (v) of The Code of Wages” same work or work of a similar nature” means work in respect of which the skill, effort, experience, and responsibility required are the same when performed under similar working conditions by employees and the difference if any, between the skill, effort, experience, and responsibility required for employees of any gender, are not of practical importance in relation to the terms and conditions of employment;

The new Definition is almost the same as that under the Equal Remuneration Act, 1976 except that instead of men or women, the new definition covers all genders. This has been introduced to also cover Transgender within the ambit of Labour Laws.

The key Difference is as under :

1). The New Definitions Excludes the Following Additional Heads From the Ambit of Wages

2). The New Definition Does Not Exclude the Following From the Definition:

3). The New Definition also Provides for the Limit up to Which the Amount Paid Under Clause

4). It also Clarifies that this Term of Wages will be used for the Purpose of Provisions Pertaining to Equal Remunerations and Payment of Wages:

Whereas The Central Government has taken a step forward to consolidate the labor laws in the proposed Codes but the key is that the definitions and provisions in the codes should be consistent with each other unlike in the previous laws. In the new article, we will share our insights on the various other key provisions of the Code of Wages provided under different Chapters.

The content of this article by Team LexComply.com is intended to provide a general guide to the subject matter. Specialist advice should be sought about your specific circumstances.

Conc@t is one of the most authentic HR shared services providers in India. Conc@t is the one-stop solution for all your Human Resource needs. If you are searching for amazing hr outsourcing companies then Conc@t comes under in the first position.

Check Out Our Other Services: