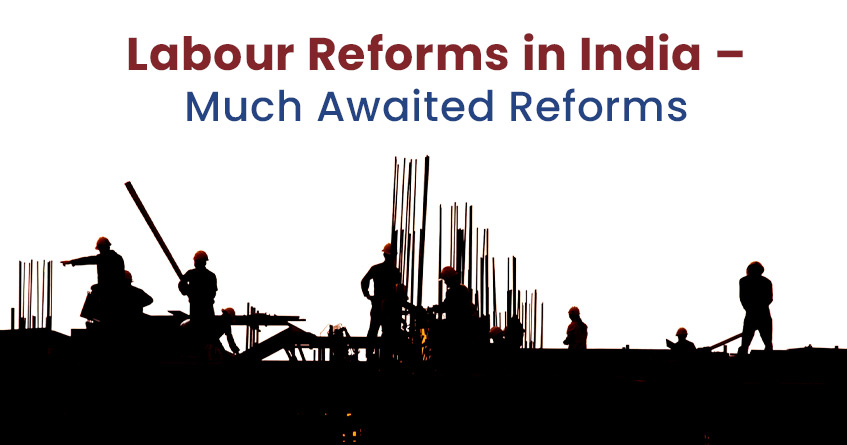 Economists have long argued that India’s outdated and old-fashioned labour laws need change.  It’s a known fact that the developed economies of the world have been flexible in labor laws and provide equanimity-based platforms to employers and employees to help sustain the business. There are some amendments in labour reforms in India.

As per the world bank report – with more flexible laws, India could approximately add “2.8 million more good quality formal sector jobs in next on an annual basis”, if the flexibility and effective implementation is ensured by employers”.

The country today is witnessing Change and reforms in almost all areas of business.

Ease of business, as well as digitization, are needed to take India inch by inch toward a $5 trillion economy.

People are the most important constituents of this anticipated growth and a lot of changes were and are required in form of labour reforms in India both from employees as well employer’s side.

The Ministry of Labour & Employment has discussed and finalized rules under the four labour codes in order to make the way for making reforms a reality, the four broad codes are- code on wages, industrial relations, social security, and occupational safety, health & working conditions which aim to consolidate 44 central labour laws.

The ministry has already completed the process of discussion and consultation for drafting rules on the four codes and firmed up those for notification. The Code on Wages has been passed by Parliament in 2019 while the other three codes got clearance from both the Houses in 2020. The ministry plans to implement all four codes in one go. Since labour is a concurrent subject, a specific set of rules and regulations would also be framed by the state governments under the four codes. The states are also in the middle of the process of notifying draft rules and holding consultations to firm up rules which are in need of implementation.

With an aim to reform the elaborated labour laws and to facilitate the ease of doing business in India, the Government of India had decided to consolidate various labour laws into four labour codes, namely,

The Code on Wages was passed by the Parliament and received the President’s assent in 2019. The draft rules have been formed and circulated by the Ministry of Labour and Employment for feedbacks. The Code on Wages shines a light on wages and bonuses and aspects relating to four existing central labour laws- Payment of Wages Act 1936, Minimum Wages Act 1948, Act of Payment of Bonus 1965, and Equal Remuneration Act 1976. The remaining labour codes namely, the SS Code, the OSH Code, and the IR Code were passed by the Parliament in September 2020 and thereafter received the President’s assent.

An overview of the other three new labour codes is provided below:

The IR Code aims to streamline the laws regulating industrial disputes and trade unions in India. Taking into consideration the benefit of the employers, the IR Code has introduced various aspects such as increasing the threshold of workers to three hundred for obtaining the consent of the government in case of lay off, retrenchment, or closure of the establishment, a notice of change not required to be given subject to the conditions stipulated in the IR Code, increasing the wage threshold to INR 18,000 for exclusion from the definition of worker, etc.

The IR Code also introduces the concept of deemed certification of standing orders, similar to the OSH Code. Although the IR Code aims to simplify the labour legislation, a wide extent of aspects under the IR Code are dealt with through delegated legislation and a complete picture would be visible once the Rules are framed under the IR Code and the other labour codes.

The SSC aims to provide better social security benefits for the working class in the unorganized sector and gig workers such as provident funds, insurance, and gratuity to workers. It improves the reach of the Employees’ State Insurance Corporation and the Employees’ Provident Fund Organization (which regulates benefits such as provident fund, pension, insurance, etc.).

The OSH Code attempts to regulate the occupational safety, health, and working conditions of workers employed in various organizations. The OSH Code also aims to widen its applicability to different types of workers such as audio-visual workers, inter-state migrants, or sales promotion employees. It also aims to promote gender equality by allowing women workers to work at night subject to obtaining their consent.

The Government of India is currently in process of formulating the final Rules under these Codes for their effective implementation. After the Rules have been drafted and finalized, the above Codes along with the Rules shall come into force on a certain date as appointed by the Government by notification in the Official Gazette.

We hope to see the reforms become reality in the next 2-4 months and hope that India would grow holistically with a lot of job creation and prosperity for employers and entrepreneurs.

About Concators and their Services:

Conc@t is one of the most reliable business consulting firms having years of experience in various services which are listed below: