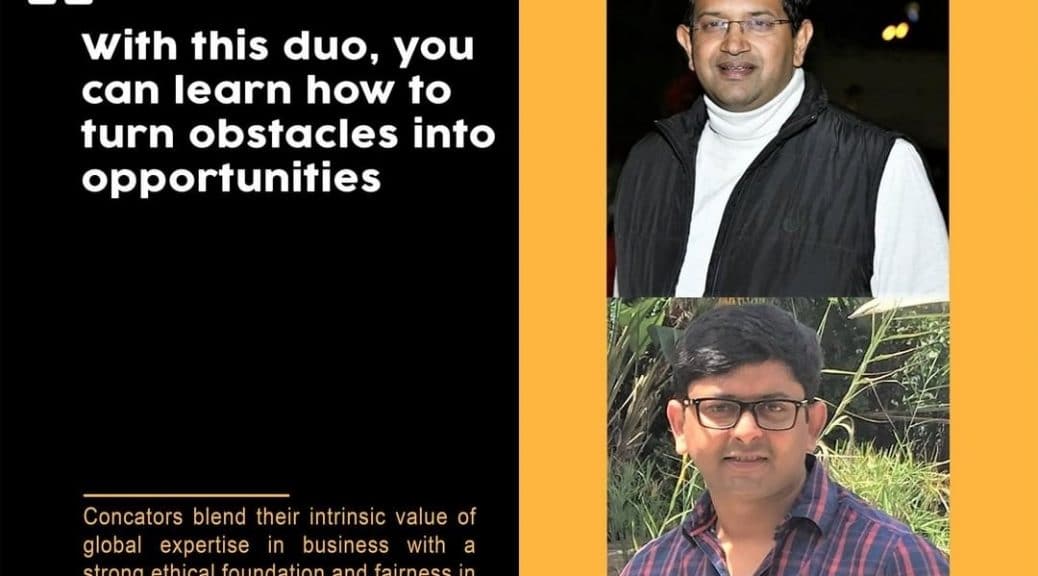 Amit Kumar Bhargava and Shorabhh Aggarwal are the founders of Concat- a B2B marketplace intending to help business startups, MSMEs to large corporates on critical aspects of a business. Concat was founded by the 3’Cs concept, namely capability, consistency, and cultivation, and the approach revolves around the concept of shared value to the company, the environment, and the community.

Have you ever heard for a person that he/she looks younger than their age and too old experienced from their work? Well, Amit Kumar Bhargava is a perfect example of it. He often gets this compliment, “Amit is 45 years old, but looks like 35 and thinks like 55”, and we couldn’t agree more. To know about this startup and its founders, scroll a little more to read their story.

Amit, an HR Professional, brought up in a Doctors’ family, has done his MBA from DAVV, Indore. While he is native to Rajasthan, he has experienced life in different spaces of the globe – initially in Iran (middle east) and then settled in Indore, MP. Moved to Gurugram in 2013 and is now well settled in the millennium city with frequent movements to Indore also (the cleanest city). He lost his parents at an early age. Yet, with his hard work and dedication to prove himself, he managed to reach a decent level with unconditional support from her sister, in-laws (parents now), and Jagrati – his wife and rock-solid support.

He started his career in 1995-96 – Worked in IT, ITES for almost 10 years and then moved to telecom in Airtel and spent 9 years, 22 years of service with Shriram group. For the last 4 years since 2017, he is working as a serial entrepreneur. His motto for life is ‘Work is Worship’.

The perfect word for Shorabhh Aggarwal would be ‘POWERHOUSE.’Oyster is the world for him. He was born and brought up in Delhi, India, and started his CA training and internship in 1998. Father has been a practicing chartered accountant, mother a homemaker, and a fantastic elder brother. Loving and supporting wife Kirti, two fabulous kids – daughter Rashi and son Krish in their pre-teens.

His hobbies are sports and cricket, which was his first love. Post-study moved to MTNL, Airtel, Reliance Communications, where he switched from Finance and Business Control to Marketing domain, and then ANB as a consulting director. Everyone bid goodbye to 2020 as it was one of the worst years in history, but this year taught us so many lessons that we can never forget. For Shorabh, 2020 was a defining year, as he got into equity investment and eventually turned into an entrepreneur. His motto for life is, ‘Be committed, no matter what comes.’

Concat is originally Amit’s brainchild. It was conceived when he shifted Shriram’s HO from Indore to Gurgaon – they were a large conglomerate but had to struggle for basic stuff in the new city – like Business Center, Travel accommodation, New Office set up, manpower firms, legal firm, IT support, etc. “That was the time when this thought triggered – what about SME’s and startups – how would they be coping up as they do not have paraphernalia as we had at Shriram,” told Amit.

After leaving his job, he started off with his HR domain to support SMB clients in all aspects as Virtual HR through ProCURE HR and then started building on the idea, which has now translated into CONCAT Business Consulting. It would be soon the most trustworthy and comprehensive B2B marketplace! They are CONCATORS- CONNECT – CONSULT – COLLABORATE.

They read extensively and carried out surveys; it highlighted that one of the major reasons of startups, MSMEs, and mid-sized organization’s failure was that the owners, founders, and leaders in these organizations were functional or product experts but lacked the management aspects from building up the organizations, creating and managing various functions and processes to run an organization. That’s where their belief got further strengthened in India needing a genuine B2B marketplace that serves all aspects of business requirements under one roof, with a strong leadership team providing assurance of service delivery and payment milestones.

Starting with feet on the street

“One of the major challenges faced by each business owner is that non-core activities eat up most productive time and then there is the issue of finding trustworthy vendor partners and consultants.”

They were and are bootstrapped. Amit and Shorabhh wanted to create a sizable business w.e.f. April 2020. After in-depth research, development of alliance models and tech platforms which were all built in the last one and a half (1.5) years, and wanted to ramp up through their digital and other marketing efforts but alas Covid-19 struck and they had to take a pause. They were almost there and still could not launch. Some people always do something that is so inspiring that it separates them from the crowd. When everyone was firing their employees, they ensured to take care of theirs (including group companies); not a single employee was fired while their business was stagnated due to reasons known to all who understand the business well.

The duo went through a series of challenges. But they converted all obstacles into opportunities and utilized time to study trends & change market dynamics and came up with a much stronger team and alliance partner model that will work as a seamless Engine for their growth and sustained business for our Service Providers. Outsourcing, gig economy, technology enablement is now extremely important, and they have created an ecosystem to address all such needs. Most importantly, they are sure of becoming a UNICORN in the next 3-4 years.

Things that kept them going through these tough times were their mutual association, employees’ trust, family members, and newly joined senior leaders like Pankaj, Biju, Milind, and Avinash.

They are behind their targets that they took a year back, but despite COVID, they have been able to make significant progress on six of the 12 CONCAT verticals. Their portal development got completed after a year worth of efforts www.concators.com, which became life in November 2020. They have on-boarded an outstanding team of service providing companies, which are the backbone of the platform.

The duo sees huge demand from startups, MSMEs, Mid-to-Large Corporates across the services verticals as service seekers, be it Information Technology, HR & Training, Financial advisory, Sales & Distribution, Marketing & Customer Success, etc. “It would be apt to say that the future is very bright, and there’s a huge potential as we move ahead into our next phase of growth,” said Shorabhh.

On asking for some word of advice for their readers, they said, “Trust is pivotal for any relationship (be trustworthy first and trust on others too)

The world is changing – be Tech Savvy.